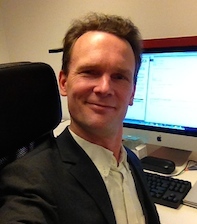 Rudolf Schlatte is a senior researcher at the SIRIUS centre, Department of Informatics, University of Oslo, and the lab manager of SIRIUS.  His main research areas are semantics and implementation of distributed actor-based languages, and modelling and simulation of cyber-physical processes, and analysis of operational data.  He has worked for various EU projects, including FP6 CREDO, FP7 HATS, FP7 Optique and FP7 Envisage, and was a fellow at the United Nations University, International Institute for Software Technology in Macao China in 2007-2010.  He is the maintainer of the ABS language simulation engine, which is used internally in selected pilot projects in SIRIUS as well as by European academic partners.  He has co-authored more than 30 scientific publications in international conferences and journals.  He is the Norwegian representative of the ICT COST Action IC1405 on Reversible Computing.